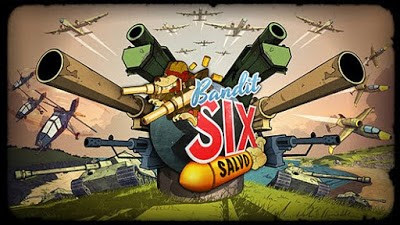 Oh Great… Another turret shooter
on the Gear VR! I’m sure this is what some people would say after seeing this
game in the Oculus app store, but let me tell you, this one is great! From the
minute you enter the games menu, Bandit Six: Salvo immediately comes to life.
From the crisp and clean cell shaded graphics, to the thundering audio of
bombers flying overhead, you can already tell that this is going to be an
awesome VR experience even though you haven’t even left the start screen yet.
Bandit Six: Salvo is the second Virtual Reality title
from UK based game developer Climax Studios to show up on the Oculus app store
for Gear VR. Salvo is the follow up to the well-received Bandit Six, which was
launched on the Oculus store for Gear VR last year. Set once again in days of
World War II, this time the game has the player defending various ground based
locations as opposed to the Aerial combat of Climax’s initial VR enabled title
Bandit Six. Similar to its predecessor, Salvo
is a first person turret shooter that uses the look to aim mechanic for
gameplay coupled with the gamepad for menu and turret selection as well as
weapons control. The initial menu for the game is alive with activity and really
helps to set the stage for what is about to happen. Once loaded into the game,
the player is dropped into a military style office and presented with the
game’s internal menu system and mission selection screen. The atmosphere
created here is perfect for the period the game is set in. With the crackling
of the radio and World War II era military décor, it really gives the player
the sense of being in the war room preparing for the oncoming attack. Once the
mission is selected and set up by choosing your gun types, placements and
weapon upgrades the action is ready to start. Upon loading into the first level
the player is dropped into a gorgeous beach scene that is soon to be a
battleground of Planes, tanks, jeeps, boats and helicopters all trying to take out
your turrets and conquer your beachfront.  As the game goes on, the
missions become more challenging and planning your gun placements and
weapon types is crucial to success. In a way, this seems to give the game an
element of real time strategy. Once the missions start the player is tasked
with manning the various turrets that were placed and is given the ability to
seamlessly switch between turrets for different types of attacks. Each turret
has different strengths and weaknesses such as the gun placements being good
for air based targets, and the mortars for taking out ground and sea based
enemies. Several of the missions had me screaming at my Gear VR in a good way!
The intensity of some of the levels heightened my emotions to the point that it made me want to come back over and over again to beat the level. The
locations that the player is tasked to defend vary from beach fronts to war
torn cityscapes and even naval defense which is one level in particular that stood out having me defend a moving vessel. In this level the player is put
onto the ship in a turret that can spin 360 degrees. The combination of the
ships movement and the rotation of the turret really increased my immersion
more so than any other level in the game.
Graphics
The cell shaded cartoon style
graphics and first person perspective work really well in the Gear VR, and help
to make the game bright, clear and colorful. The choice of this graphics style
also helps to reduce the still slightly visible screen door effect of the Gear
VR to practically nonexistent levels as well as making the 3d pop nicely. There
were a few times where the bill boarding issue was apparent. One example is the
explosions which looked great until the player moves their head and then it is
obvious that these seem to be 2d set onto a 3d background giving the illusion
of the graphics seeming to shift with the players perspective on these specific
assets. This however was the only noticeable graphics flaw I could see and it
was only apperant when I looked for it.
Comfort
No big problems with comfort in
this title. The head tracking is butter smooth and the framerate only seemed to
lag during the later stages of the game when I had been playing for an extended
period of time. This is common in most graphically intensive titles on the Gear
VR due to the thermal issues that still persist.
“Use of VR” (how much value
did VR add to the experience)
Virtual reality adds quite a bit to
the experience of playing a title such as this one. I have played many turret
based defense games in my day, but never have I felt so immersed in one. Seeing
it as if you were there on the battlefield makes Bandit Six: Salvo an intense
yet satisfying experience.
Gameplay
The gameplay in Bandit Six: Salvo
is both fun and addictive, but as it is with this genre of games, things can
get a bit repetitive at times. The action gets quite intense in some levels and
has the player making quick decisions as to which turrets to take control of to
accomplish the task of defending their area which gives this game a decent
twitch style.
Audio/Soundtrack
The
audio is crisp and clear and the thunder of explosions and gunfire ringing out
all around adds to the overall feeling of being in a warzone.
Overall, this is a solid second title from Climax
studios. The gameplay is both fun and fast paced, and the style of the
environments and graphics work well in the Gear VR. This is one of the better
looking and feeling titles I have experienced in the Gear VR. Overall this game
had me wanting to keep returning to the battle to either complete the level or
best my last scores. Coming in at a price tag of only $4.99, this game gives
the player hours of fun and a bit of replay value. Bandit Six Salvo is
available for download now on the Oculus App store for Gear VR and if you like
this type of experience, I recommend grabbing a copy for your library. This one
gets the vrgamerdude seal of approval.
* All images used in this article
were sourced from Google Images
Brought to you by vrgamerdude of
the VR Spies www.vrspies.com