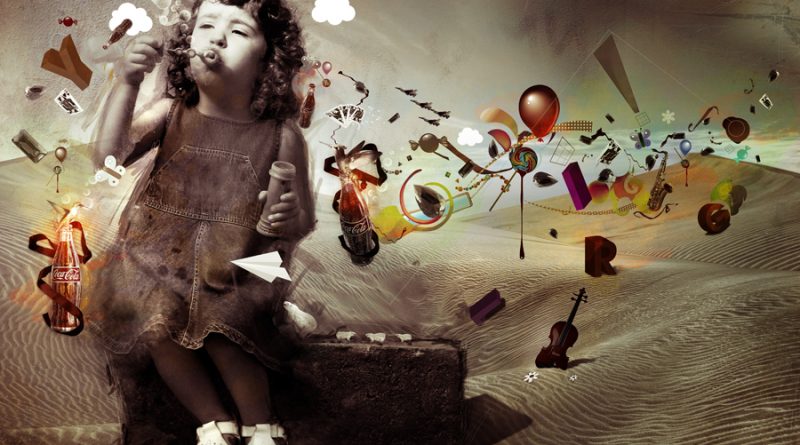 Animals react to their environments, they are chased and they run, or perhaps they turn on their attacker and fight. Humans possess the same instincts, we refer to “fight or flight”, more recently it seems popular, among wikipedia educated psychologists as myself, to talk about the “lizard brain”, an ancient and inherited reactivity to our environment. This raw and basic mental processing power is what we share with the animal kingdom. However, what sets us apart is our proactive nature. What does it mean to be proactive, in short it means Humans don’t just react to our environment we analyse and we predict, we observe and we empathise. There is another word for this intelligent proactive assessment of our environment – imagination. Imagination has grown from our reactive animal foundations, the abiity to look across a plain and observe our hunter or prey, to imagine a thousand iterations of potential outcomes and take the best possible course of action. To see your own death and avoid it, to survive and bring forth a new generation of even more visionary offspring. This is so much more than a simple enhancement of our reactive reflexes. Imagination has allowed Humans to be creative, innovative, artistic, compassionate, emotional, loving, I use these terms together as they belong in the same family of human values. Imagination has allowed humans evolve. But not all humans are equal. Some are closer to reactive animals than others, some lack imagination, they don’t know how to empathise, love, think critically while holding opposing views, they coast through their environment – and indeed their life – without joy. Worse, the behaviour is like a virus, the control of emotions and imagination is often considered to be a form of emotional intelligence in our society today, the belief that being sensible and reserved was somehow a sign of a mature and intelligent mind. This was perfectly represented by Leonard Nemoy’s memorable Mr Spock – a character from an advanced alien race who bred out their emotional, playful, childish imaginings. Spock mingled among his less sophisticate barbaric, emotional counterparts on the USS Enterprise with an air of superiority. As startling a futurist and visionary Gene Roddenberry was, in my opinion he was wrong to propagate this social myth that imaginative Human traits are anything other than remarkable. Interestingly Spock’s first appearance in “The Cage” showed an excitable, emotional and childish character, surely a true representations of a more evolved humanoid species.
At this point you are probably thinking, yes, very interesting and I also enjoy Star Trek so thanks for throwing that in… but hang on – what on earth has this got to do with Virtual Reality? Well, I am getting to that.

Over the years I have delighted in sharing my wonderful technology with as many people as I can. I have felt blessed and so have shared as much as possible. I have open offers with my friends to pop round to my house, preferably with a bottle of something, so that I can demo the latest experience. I have also carried my equipment to local fairs raising money for charity with “£1 per ride rollercoasters”. I have demonstrated it at a scouting event to a queue of eager people. From all these interactions it is very clear that some people lack imagination, or perhaps it has withered away thanks to the pressure of societal norms. They do not have the “childish” and “immature” ability to suspend disbelief. These people cannot look into a remarkable, wondrous, beautiful, horrific, exhilarating, thrilling scene without allowing their emotional wall to build up, block out the light and then fall on them, squashing the experience into a flat and bland mush. They take off the HMD and will tell me, “Very good”, but I can see that they knew it wasn’t real, they could not believe in VR, they could only coldly assess how it wasn’t real. I feel very sorry for them, because if anyone needs to escape to another reality – it is these people. Their lizard brains just don’t care. The industry right now is very concerned and focused on the subject of “VR Sickness”, which is a problem of course, but they are pandering to – let’s be honest here – a majority of people that simple won’t care about VR regardless of how sick it may makes them. The rest of us will push through any sickness barrier and run into the rift, soaking up every last detail with mouths hanging in joyous suspended disbelief. The industry shouldn’t develop immersion breaking comfort modes, they should focus on making it as immersive as possible. Life is hard so why should VR try to make it easy? The industry should instead be worried about this untappable market of unimaginative people, people who will tell you – with a twinkling of pride in their greying eyes – that they don’t play video games, watch cartoons, enjoy the graphic novels of Alan Moore, talk to people on trains, climb a mountain because it is there, dance in the rain. These people died long ago and it’s time to move on. It’s time to evolve. ~200 people have tried my rift over the years, I really should wash it.

Brought to you by UKRifter of the VR Spies
www.vrspies.com