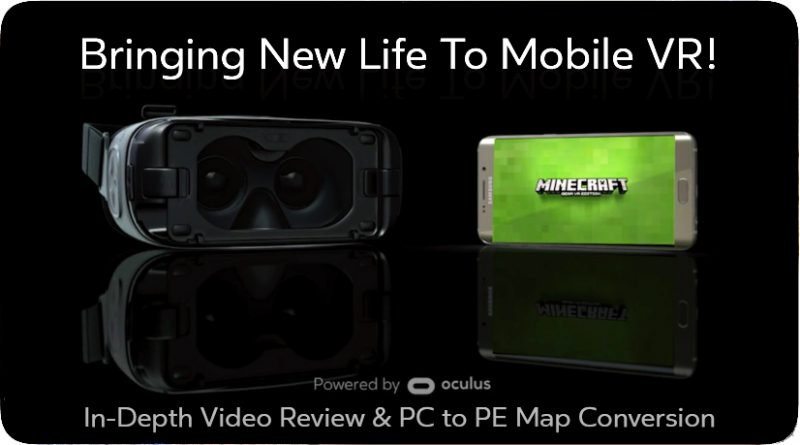 This is BIG! I don’t know if you really know how ‘BIG’ this is, so I will try to explain..

Minecraft Gear VR Edition is going to sell people on VR far quicker than anything else possibly could!!!    ..and you say “Why is this Caleb?”

I say it’s because kids, teenagers, and adults all love Minecraft… still… even after all these years that crappy looking, addictive hooking, chicken cooking, “survival block game”, still captures the attention of it’s players! Now that this beloved game is officially supported for a VR platform such as the Samsung Gear VR, mainstream knowledge of this technology will spread even quicker than before! For years people have already been playing Minecraft in VR on the DK1, DK2 and recently the Vive, using a neat hack called “Minecrift”. Although this allowed us to glimpse our creations around us it was never as polished feeling as this official release is with the Gear VR Edition. Unfortunately using Mobile VR we do not have positional tracking like you get using the other HMD’s. Having said this I can say after playing around in the Gear VR Edition for about 30 minutes I completely forgot about the lack of positional tracking. I believe the developers of this port did a nice job at allowing your characters body to move in 3D space as to avoid sickness feeling.

As you can see in the video there is a comfort theater mode which puts you into a Minecraft room looking at a tv about 3-4 feet in front of  you displaying your game. When you touch your touch-pad on the side of the Gear VR you can choose between full immersion or theater mode which I think is a really nice touch that many games could benefit from, especially current mobile VR games that have no way of giving positional tracking. For my review I used the Samsung Note 5 and could play comfortably for about 40 min before the device needed to stop and cool down. The quality is outstanding and the screen door effect was not apparent at all! Although I do not think the Gear VR is as comfortable as a CV1 or a DK2, I do think it is one of the best looking VR devices available! If you have a Gear VR then you will want this game in your library!