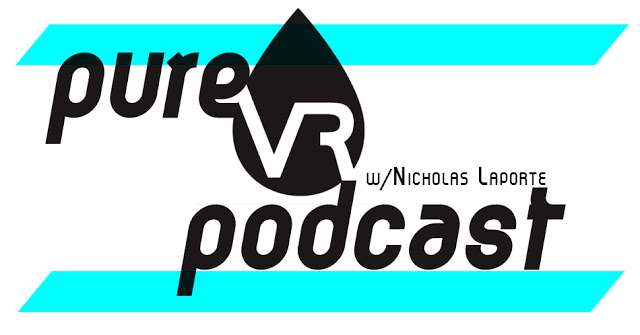 Business Friends of the VRSpies Podcast
January 30, 2016June 7, 2022 realitycheckvr 2434 Views informative, interview, news, podcast
The subject of Virtual Reality is becoming more popular than it has ever been before. Personally, I find it almost exhausting at times to keep up with the ever-changing news & info about hardware and the different types of input devices that are constantly becoming available. Not to mention the fact that there are new developments in games and immersive experiences being released weekly! Luckily for us there is a strong community of websites, podcasters, YouTubers, and developers that do their absolute best to sort through the muck and bring people the most interesting and relevant content.
PureVR Podcast was one of the first virtual reality themed podcasts available to the masses, and because of it they have had the opportunity to interview some very interesting developers and community members over the past few years. Hosted by Nicholas Laporte with co-host Brandon Papp, pureVR has come a long way in a short amount of time informing the public about current VR events.

Some recent guests on pureVR include Reverend Kyle (whom also hosts a VR-themed podcast), Ruuubick (team-member @altspacevr) (well-known french social-vr-guy), and most recently myself!

For the interview process, Nicholas Live Streams the video podcasts using Google+ Hangouts directly to YouTube where you can watch either live or anytime afterwards on the pureVR page.

A Brief Interview with Nicholas Laporte

Q. Where are you from and when did pureVR begin?
I am currently living in London, Canada. PureVR began in May/June of 2014. I had been following the VR scene for about a year at that time and my excitement was inflating with every passing week. I needed an outlet where I could share my passion and spread the word about all of the incredible things I was reading each week. So I called up Brandon (my co-host) about starting a YouTube channel and podcast. He was stoked about the idea…so here we are a year and a half later hosting a weekly podcast all about VR!

Q. How did you get into Podcasting?

I have always been a huge consumer of many different podcasts but at the time when my interest in VR peaked I had been a big fan of the Rev VR Podcast. He would talk with a guest every week about their endeavors as a Developer or content creator. They would often get deep into the subject at hand. It was fascinating and I couldn’t get enough.
The thought of creating my own podcast swirled in my head but it wasn’t until I heard the 2014 SVVR Uber cast from Rev that I knew I wanted in. It was a collection of VR podcasters with Palmer Luckey at the first Silicon Valley Virtual Reality expo shooting the shit and having a great time! I desired to be a part of that scene in a bigger way. So then followed my planning of a light podcast surrounding the latest news and VR titles. Almost a year later we actually made it to the 2nd SVVR expo to take part in a similarly formatted podcast!
Q. Where did your passion for VR come from?
My passion for VR definitely stems from my love of gaming. As a kid in the 90s I remember hearing rumors about virtual reality ‘goggles’. I had never been more intrigued by anything I had ever heard of. I even remember a farcical rumor about a 1st person Starcraft simulator where you played as a space marine all the while being strapped into an omni directional treadmill and carrying a C-14 Gauss rifle. Total BS, but the idea was none the less titillating.
When I first caught word of the Oculus Rift DK1 kickstarter a few years ago I realized that VR was finally on its way. I followed VR lightly until I had the chance to try the DK1 for the first time. I had randomly met James McCrae, creator of JanusVR and he graciously invited me to try it out. He showed me through multiple demos and even gave me a chance to use the razor hydra. After that first taste I was hooked and have not looked back.
Q. Considering all of the people that you have interviewed, what moment stands out the most?
What stands out for me the most is an entire interview rather than a moment. In June of 2015, Brandon and I had the chance to interview Ela Darling of vrtube.xxx . We had never really breached the topic of VR porn before that point so we really had the opportunity to talk about it head on with someone in the industry. She had so much to say that really changed my perception of porn as an industry. I recommend you check it out. itrl? P in the VRcast.
Q. What has been your favorite VR experience to-date?
This is a really tough questions because over the years I have tried an outrageous number of VR demos, games, experiences etc….at least it feels that way. If I HAD to choose one I would have to go with Sightline: The Chair by Fruxious. The way that the game design encourages you to look around through curiosity and be a mechanic that progresses the experience was a revolutionary approach. It is still my go to for first time rift users. Gets ’em every time!

Below is a video of the latest podcast from pureVR, we focused a little bit on some of my older developments and current projects but mainly we discuss the potential and limitations of current vr technology. Take a look!

Thanks for checking out the article if you have any questions or comments please feel free to leave them below and I will certainly get back to you!

Brought to you by RealityCheckVR of the VR Spies www.vrspies.com