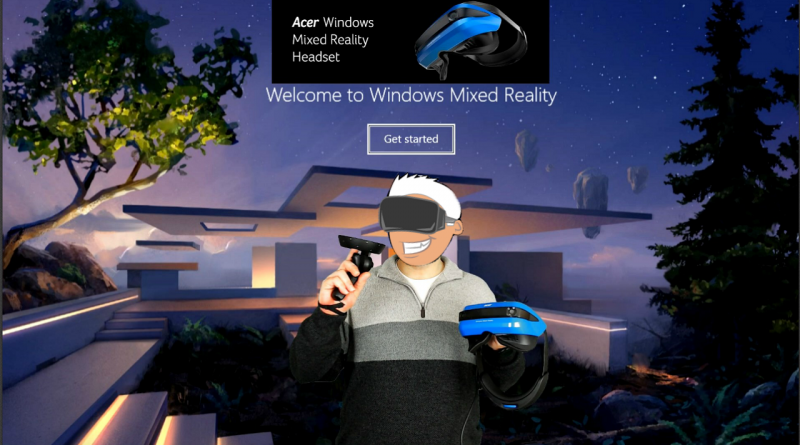 Today I am taking a quick look at the Acer AH-101 Window Mixed Reality Headset. I have to admit that I have been intrigued ever since Microsoft threw its hat into the VR ring and announced all of the different MR headsets that they were releasing through many different manufacturing partners. So with that in mind I set out to see if I could get my hands on one to test and I would like to thank Acer for giving me the opportunity to do just that. Upon first opening the box and removing the headset I was immediately struck by the weight. The AH-101 felt slightly heavier than my Oculus Rift but seemed to be slightly better balanced thanks to the crown style head strap. The next thing I noticed and very much have come to like was that the headset has the ability to be flipped up for interaction with the real world. I hate having to slide the Rift up onto my head to see what is going on in the room and this headset and many of the other WMR variants seem to solve this with the addition of a simple hinge. This is a feature I would love to see in all of the other VR headsets out there currently! The next thing that immediately jumped out at me was the lack of any sort of on board audio solution. With this and almost all of the other WMR headsets you are going to need to supply your own headset for audio and mic capability. The Acer headset takes care of this by adding a 3.5mm dongle that hangs off of the side of the headset allowing the user to plug in their favorite gaming headset or headphones. I was pleased to see that my Plantronics RIG headset plugged right in and had no issues with either sound quality or the ability to use the mic. This was still a bit of a throwback to the DK2 days for me though as I have gotten spoiled to the great audio experience provided from the Oculus Rift’s built in headphones and mic. Well now that I had the headset out of the box it was time to check out the controllers. Overall they are descent enough but again I have been spoiled by the highly ergonomic design of the Oculus Touch controllers so these wands immediately felt a bit strange in the hands. The WMR controllers seem to me to have taken a page from HTC’s book and seem similar to the Vive wands with one notable difference in that they include both an analogue stick and track pad. The button placements were all where you would expect them with such things as the triggers and grips being functional but I did find issues with the small system buttons that are placed close between the stick and pad. I found myself inadvertently hiring this button quite often during my game sessions. So now that the hardware is out of the way it was time to get it all set up and working. I am pleased to say that the set up process was pretty much plug and play and I had the unit set up and ready to go within minutes of taking it out of the box. Since there are no additional cameras or base stations to install the setup was pretty much as simple as plugging the headset in and waiting for the software to install. Once I had it installed however is where I started to notice both the freedoms and limitations of the inside out tracking solution. While the headset tracked pretty much flawlessly the controllers were a different story entirely! Often times I would notice they were losing tracking by just comfortably resting my arms at my sides or of course when reaching over my shoulders. This is the unfortunate trade off of moving from a sensor/camera based solution to an all on board system using the cameras on the headset. Overall the tracking was not completely terrible but it was enough of an annoyance to make me wonder if this would truly be viable for intense VR gaming sessions.

So after trying a few games in Steam VR I have to say it was pretty much as I expected. The headset never seemed to miss a beat but again the controllers were the pain point here. The first game I attempted to play was Skyrim and often times I was met with one or both hands simply flying away or glitching out at very inopportune moments. Where it did feel good though was when I switched to a sim style game. Playing something like Elite Dangerous was a great experience! Since this took the controllers out of the equation the increased resolution was enough to bring a smile to my face!

So overall my thoughts on the Acer Ah-101 and I’m fairly sure other WMR headset would be the same are that while the headset itself is sound the controller tracking still needs a lot of work to make this on par with the Rift or the Vive. I will say though that for the fact these headsets can be found deeply discounted on Amazon and Ebay from time to time that if you are a gamer on a budget and play mostly Sim games or game pad titles this is still a great entry into the world of higher quality PC based VR. So it boils down to this…. If you have a high end gaming rig then I still highly recommend the Rift to all of the other headsets out there right now but if your PC is in the mid spec category and you can stand the controllers glitching out from time to time then a WMR headset might just be the way to go for you.