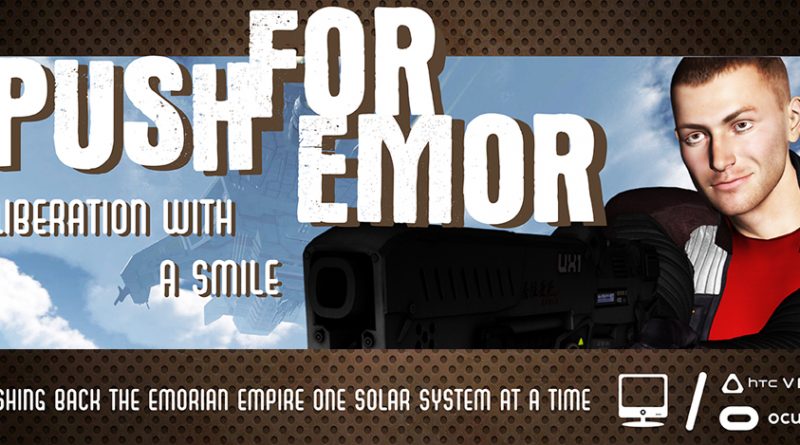 Open world games are somewhat of a rarity in VR, with many developers opting to stick with smaller room scale experiences rather than tackle the whole tricky issue of open area locomotion. One developer who wanted to break out of that constraint and go exploring was Garry Hamer the founder of Lupus Solus Studios. Garry is that solo indie developer who decided to make his escape by creating Push For Emor.

Push For Emor is an FPS RPG set in a science fiction universe that has you completing missions as you battle across it’s 11 explorable planets. But the fun does not end there, the game also has you fighting enemy pilots in space before boarding their floating wrecks for loot and weapons. More you say? Well how about space stations, pilot-able vehicles including different space craft, mission giving NPCs, RTS style resource gathering, bringing down the heavy stuff, and the all important chicken gun. I could say more but I wouldn’t want to spoil it for you….

These Boots were made for walking

As for the games locomotion,  when playing on the 2D Monitor or in VR, players who are using a mouse and keyboard or gamepads, Push For Emor will default to a standard FPS movement model. However, if you are using tracked controllers such as the Vive wands or the soon to be released Oculus Touch there are many more options.

The game is made for roomscale so you are able to turn and walk around your mapped out area to explore as normal, but when you want to move greater distances players will have the option to use standard FPS movement. With the FPS movement there is also a ‘Cruise Control’ feature which will automatically walk you forward until canceled.  The movement is ‘look to walk’ but only for the first step. After that you are free to look around as normal.

If you are the kind of player that gets motion sick quite easily, you can use one of the two teleport options Push for Emor offers. The first is the classic ‘arc’ teleport which is good for positioning yourself close to objects. The second is something the game calls ‘Warp Step’ which will instantly teleport you forward by 15 meters being very useful for covering large distances quickly.

When playing the game, I quickly found that I would naturally start to use all of the movement systems together. Having gained my very strong VR legs after years of gameplay, the FPS movement was fine for me, but even so I found when walking in a straight line I would warp step often to speed things up a little and then stop and arc teleport for finite positioning. It really is a nice combination of locomotion systems that will allow players to use what works for them or perhaps do as I did and use a bit of all of them in conjunction.

The game’s story puts you on the side of the Justicar who are being threatened by the aggressive expansion of Emorian Empire. The Emorians have taken over a number of planets in free space and are now on the Justicar’s boarders. Your Colonel has decided against his usual ‘all guns blazing’ tactic and is sending you in undercover to fight alongside the planets resistance fighters to help them win back their worlds.

The resistance needs you. Join Today!

Upon getting your first mission from the Colonel and making your way planet side finding your resistance contact is your first job when landing on the new world. They have already made a recon sweep of the planet and have mapped out a course of action which will require your specialized skill set. They may also have weapons and vehicles for you to use in order to aid your liberation attempt.

A nice little run around.

Each solar system is of a different tech level. Vehicles representative of the planets advancement will be available for you to use. One of the great things about this game is being able hop into different rides and go exploring. If you see something in game that looks like it might be used as a vehicle, there is a good chance you will be able to get in it.

Once the local populous is safely under the protective wing of the Justicar, players must deploy a base to help keep them from harm. We wouldn’t want those nasty Emorians to come back now would we?

Push For Emor allows you to freely travel between planets via unlocked warp gates whilst fighting pirates and Emorians along the way. Take out a ship and board the wreck, but make sure you lock and load first. Wreck survivors tend to be a tad prickly about having their ship blasted and even less happy that you are now aboard trying to loot their cargo holds for weapons and plunder. Get in, clear the ship, grab the swag and exit for a well deserved space beer.

The further away from Emor, the lower the tech level of the solar system. The first system you encounter is so Low-Fi that the game describes one of it’s planet’s inhabitants as ‘still throwing rocks at the moon’. Steampunk planets and Sci-Fi cyberpunk planets are in the works, each with its only brand of weapons and vehicles and space craft unlocks.

The Justicar war effort needs raw materials to keep moving forwards. As luck would have it, each solar system has a dedicated resource planet that can be processed for the minerals needed. Players can build mining facilities and get harvesting those resources, but will want to make sure they invest in some turrets and a barracks because you never know if the planets population is going to attack, or if the Emorians are going to drop in for a not so friendly chat!

Push For Emor launches into Early Access on the October 24th 2016. You can grab a copy here:

Early Access will include the first 4 planets, space combat, boarding of pirate ships and your home space station and a bunch of vehicles and ships to ride and fly.
Garry Hamer is the developer of Push For Emor and is a good friend of the VRSpies…  We are excited to see Push for Emor launch into Early Access after watching the game grow from its earliest release. I will be keeping an eye on its further development and look forward to seeing the finished game.