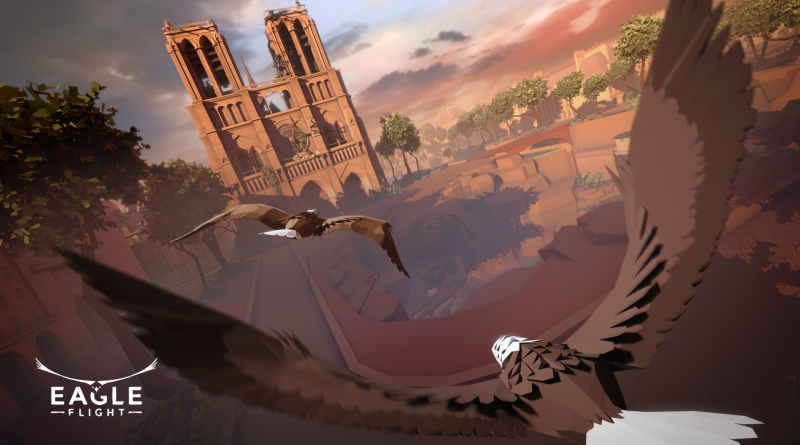 Take to the skies as a fierce aerial predator in Ubisoft’s Eagle Flight (for Oculus Rift, HTC Vive and PlayStation VR)

Welcome to Eagle Flight, Ubisoft Montreal’s first dip into the virtual reality gaming frontier. You assume the role of a newly-hatched eagle and are given free reign over the skies of a Paris that’s all but completely reclaimed by nature. Eagle Flight offers both a single player “campaign” and a multiplayer mode, and has all the polish that you can expect from a Triple A publisher. However, the question remains: is it worth the Triple A price tag?

Before I dive into the different game modes I’ll explain how the controls work. You’re given a first-person perspective of your bird and your movement is controlled by turning and rotating your head. Look to the left and your eagle will turn as you do, or tilt your head to either side for a sharper, more aggressive turn. Speeding up and slowing down are done by pulling the R2(RT) and L2(LT) triggers respectively, and your combat skill, the Echo Wave, is activated by pressing the Square (X) button. The controls are tight and intuitive, and while it took a few minutes to work out when to “turn” and when to “tilt” my head, Eagle Flight does a great job of making soaring through the air as natural and enjoyable as possible. It’s very comfortable, and I didn’t feel motion sick at all while playing. The only discomfort I felt was due to jolting my head back and forth trying to dodge obstacles at breakneck speed (no pun intended). When discussing the single player of Eagle Flight, the word “campaign” is used very loosely, and the gameplay consists of a variety of missions that take place throughout different districts of Paris. It’s held together somewhat by a less than memorable narrative but, in fairness to the developers, when your protagonist is a bird-of-prey there’s only so much you can do. Which is fine, and to be honest I’m glad the game isn’t stuffed with hollow and unnecessary story fluff, because the gameplay speaks for itself. There are a handful of different types of missions over the course of the single player mode ranging from time trial races to combat challenges and my personal favorite, the precision speed challenges. At the end of each mission you are awarded up to 3 stars based on your performance, and are shown a leaderboard comparing your time to other players across the globe. If you enjoy time trials and replaying races over and over again trying to shave off seconds each run, this game is definitely right up your alley.

In addition to the missions, you can roam around the city of Paris freely between missions, collecting feathers and other collectibles scattered throughout the map. While the Assassin’s Creed series may have exhausted any enjoyment I get from collectible-hunting, if your inner completionist itches to find each and every one then you’ll get a lot out of flying around exploring the city. In addition to the single player campaign, Eagle Flight offers a multiplayer mode that allows you and your friends to go head-to-head in a capture the flag style game mode. Your objective is to retrieve a dead rabbit somewhere in the map and deliver it to your nest, all while preventing the other team from doing the same. It’s essentially one flag capture the flag, and I can see why this is the gamemode the developers decided to include; the tension and excitement in this mode is incredible, and dipping and dodging through destroyed buildings trying to capture the “flag” was easily the most fun I had with this game. However, despite how enjoyable the multiplayer may be, it’s simultaneously the most disappointing aspect of the entire game. One game mode simply isn’t enough to keep things interesting for long play sessions, and the exclusion of a progression system or any customization options seems like a huge missed opportunity. Everyone in the multiplayer has the same Echo Wave weapon and Echo Shield protective barrier, and this lack of diversity really hurts this game’s multiplayer. Why not offer players a choice of weapon, or give them access to perks as they level up? Heck, even cosmetic unlocks would be a hugely welcome addition, and would incentive players to invest more time into the multiplayer than they otherwise might. The squandered potential here is an absolute shame, and for such an accomplished studio as Ubisoft Montreal I would have expected a bit more depth to this multiplayer mode. Again, it’s still fun to hop into every once and a while, but I just wish there was more to sink my teeth into.

Be sure to check out The VR Vault’s Eagle Flight Game Showcase to see a breakdown of the single and multiplayer gameplay!

As a first attempt at a VR title, Eagle Flight is a very solid title and really does have a solid amount of content to play through. Flying over the cartoony yet beautiful Paris is a treat thanks to the incredibly tight controls, exciting feeling of speed and scale of the world around you. While it’s not perfect, and the multiplayer has the depth of a half-empty kiddy pool, Eagle Flight is a fun experience that will eat away hours without you really noticing it, and that’s hard to say about most VR titles I’ve played so far. If you like time trials and collecting items, this one’s definitely worth a look, and if those things aren’t your cup of tea I’d still say keep an eye out for a drop in price to at least see for yourself what it’s all about. Eagle Flight makes me hopeful for the upcoming titles that Ubisoft has for VR, and here’s hoping that the other Triple A developers follow suit.