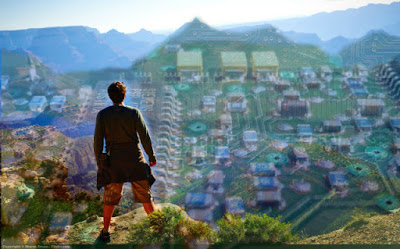 This is the first of my series which takes a bit of a “tongue in cheek” look at the pros and cons of reality vs virtual reality. Not to be taken too seriously but may start a conversation.

I have to start with an admission, I am a bit of a Karl Pilkington when it comes to the matter of travel. So let’s start with a quote from the great man himself which perfectly sums up pretty much everything I have seen in my travels.
“I’ve never liked wedding cake due to the amount of icing, but then imagine a wedding cake without it; just a dark, stodgy, horrible dry sponge. The icing covers up the mess, and that’s how I feel about most of the Wonders. They use them to get people to visit a place that you probably wouldn’t think about visiting.” – Karl Pilkington
As a young man, the idea of world travel was incredibly appealing. I grew up in a rural community in the UK. When I traveled into my local town, I loved to drop into the travel agent and pick up some brochures, take a look at all the remarkable places and plan future trips. With no money these were pipe-dreams of course. I was stuck in a beautiful and verdant corner of a wonderful island. So I didn’t feel too bad about it and was happy to keep on dreaming.
As I got a little older I scraped together money, I would take summer holidays on Greece islands with my then girlfriend and now wife. As we got older we got more adventurous, Thailand, China, New York, San Francisco.

Then I started my career and as I was promoted through the ranks I was expected to travel more and more. The excitement of travelling to California waned as it because my second office, I visited every couple of months, interspersed with trips to almost every country in Europe, flight to Russia, India and so on. Travel became a major drag.
When it comes to booking my holidays now I prefer to visit the rural corner of the UK where I grew up dreaming of being elsewhere. The irony is not lost on me. What stopped me from travelling in my young, adventurous days was money, what stops me now I have the means is simply the lack of motivation.
Virtual Reality not only has the potential to open up the wonders of the world to everyone, rich and poor, it also allows adventurous and lazy alike to be transported instantaneously to a destination. To stand on a summit and gaze to infinity at the valleys below, to experience other cultures, cities, sights. Beyond that – to look out of a portal of the international space station, to stand on the lunar surface.
Let me give you a perhaps extreme example. I had to fly to LA & Phoenix on a work trip. I thought I would make the best of the situation by visiting the Grand Canyon. First I flew into LA and experienced the worst that homeland security has to offer. If you are an American reading this you may have you opinions around the welcome you receive from this department, as a foreigner I can assure you – I have never got of an 11 hour long haul flight only to seriously consider getting the next flight home. Herded shunted a shoved through lines and doorways. Hours queuing. I’m British for God’s sake – queuing is a national sport, but this was too far. I go to the attention of a woman who fainted into a pool of her own vomit due to the fatigue and heat. The sheep ambled by and I lost another 30 minutes there. Finally through I was shoved onto my flight to Phoenix. I jetted over the valley and landed in a reasonably short time. More herding, more prodding, more scanning, more questions and fingerprints. Queuing for luggage, queuing for my car. When would this end? Phoenix is a seemingly endless sprawling suburbia, very few redeeming features with the exception of the beautiful surrounding mountains which occasionally jut into the viral urban growth. The whole place had the feeling of being on a low and massive flood plain. I found my motel and cursed my travel agent, it was a dingy affair, the car park seemed to be the meeting place of a local gang who played their music and drank into the night.
I woke to a warm and sunny spring weekend day, my job didn’t start until Monday so I put on a light jumper and headed off in my rental car to the GRAND CANYON. I was very excited. I drove for hours, up, climbing and climbing out of the flood plain and up toward my destination. I didn’t think it was possible to keep climbing for such a long period of time. The temperature was dropping fast, 60, 50, 40. I turned up the heater and regretted not bringing my coat. A car drove past covered in snow, surely not. Onward I climbed.
Snow started to fall, as I continued the roads because treacherously slippery. I passed 3 cars lying on various abnormal ends. Forgetting my coat was beginning to feel like a life-threatening mistake.
20 miles to go. I pressed on. The rear wheel drive car fishtailing with every press of the throttle. I reach 1 mile of the grand canyon. The small road down to the view point was covered with 4 foot of snow. I swung into a truck stop and walked into the shop to keep warm. I talked to a trucker about the array of caffeine based stimulants being sold. I stared across at the small road, shook my head, and drove carefully home. I learned a valuable lesson that day, deserts can be very cold.

It was a 7 hour round trip for nothing. I spent the Sunday aimlessly wandering around local mall, lamenting lost experience.
Recently I saw “The Grand Canyon VR Experience” and it appealed to be greatly. I got thinking that even 50% as good as the real thing has to be good enough when you consider the expense, effort and potential disappointment of travelling in reality to any destination. Watch my video below.

What will VR do to tourism? Virtual Reality tourism may cause people to travel less and less. Travelling to destinations physically may only be within the reach of only the super rich. The real view uninterrupted by the proletariat, safely tucked up in their VR units at home. One thought on “Reality vs Virtual Reality: Tourism”