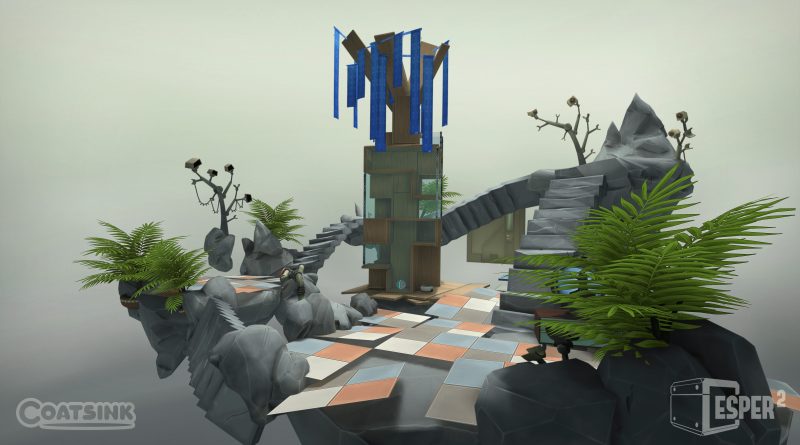 Enter the stylish and psychic world of Esper 2, a physics based puzzle game from Coatsink Software; a seemingly normal world that quickly reveals it’s anything but thanks to the extrasensory powers of you and a few other characters.

You play as an Esper, a citizen with supernatural psychic powers, and all of the puzzles in Esper 2 revolve around you manipulating the environment with your mind. Using your head, you simply look at objects to move them around in the game. It’s simple but effective, and it’s a great way of using VR in an interesting and believable way. The story of Esper 2 corrals you through a plethora of environments from office buildings to Aztec ruins and everything in between, solving puzzles with your psychic abilities the whole way. In each (or most) new area, a new puzzle element is introduced, challenging the player with new ways to manipulate the world, keeping each new environment feeling fresh. The puzzles range in difficulty, and most are challenging enough to be satisfying while never getting complex to the point of frustration. The few times I found myself stumped on puzzles were not the fault of the game, but rather my own incompetence or lack of awareness of the world around me. However, throughout the course of this 6-hour game, I will admit I got a bit bored of the puzzles that involved nothing but moving shapes in a maze behind a pane of glass. After the first 2-3 hours, the flimsy nature of these puzzles start to feel a bit repetitive, even with the gimmicks of each new area.  The most engaging puzzles by far came from the larger, more open puzzles that allow for more manipulation of the objects in the space around you. Those puzzles are Esper 2 at its absolute best, and I just wish there had been a few more of them throughout the game.

Much of the story of Esper 2 is delivered through the dialogue between other ESPR agents you meet throughout the game. Geoff, Anna, and a handful of other characters chirp at you as you progress, some encouraging, some not so much. In that sense, I feel that Esper 2 wears its inspiration on its sleeve, and within the first 5 minutes of the game, I found it impossible not to make comparisons between it and the Portal franchise’s beloved GLaDOS, which is an impossible act to follow. Luckily, Esper 2 doesn’t try to, and thanks to the way the characters interact and the story unfolds, it feels distinct enough to differentiate itself to the franchise that did it best. As is true with any VR title, believable environments are incredibly important and Esper 2 absolutely nails them from the very start. The player begins in an old-fashioned office building that could have been pulled straight from the likes of Mad Men or LA Noir. The game’s introductory environment just oozes with 1960’s charm, and with scotch glasses and cigars lining nearly every table in sight, you feel immediately present thanks to the fantastic details. Even things that should feel out of place, like the incredibly high tech equipment dotted throughout the facility, seem to be right at home in Esper 2, which is a testament to Coatsink’s ability to craft rich and believable environments.

You can understand why such love and care was put into each area when you consider the way movement is handled in Esper 2. The player is perpetually glued to an office chair that teleports from point to point, meaning that I sometimes found myself looking at the same room for several minutes at a time. These rich environments keep those moments from getting dull, especially in some of the more dialogue-heavy scenes in the game.

All in all, Esper 2 truly is a delight, with an engaging and mysterious story and some interesting mechanics to boot. Considering how much content you get at such a low price, I’d say giving it a try is a no brainer. Esper 2’s strength and uniqueness come from so much more than just its puzzles, and it shouldn’t be overlooked even if you tend to shy away from this genre. It gets a solid yet sarcastic recommendation from the VR Vault.