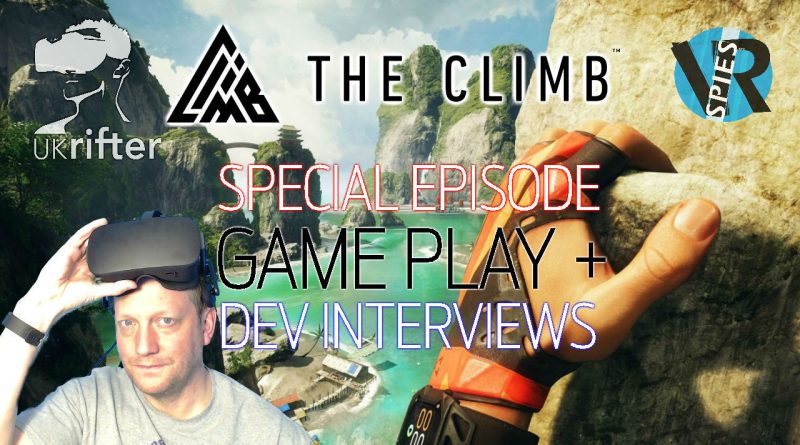 When Crytek calls and asks you to try out their game and meet the team, you don’t say no. Well, I don’t. Crytek’s cryengine changed the face of PC gaming, first with the release of farcry which became a successful franchise, then with the award winning strategically polymorphic FPS series – Crysis. Crytek are known for cinematic and staggeringly beautiful graphical fidelity and story driven plots that film producers would envy. So for me they are the pinnacle of software production houses, and how thrilled I was to find myself chauffeured through the city of Frankfurt, bright green with the new growth of Spring on its leafy roadways, on my way to meet the the team of their showcase VR title “The Climb”.

I am met by the smiling face of Bastian Thun, Crytek’s community manager, who led me to their relaxed offices, glass cabinets full to bursting with awards with more arriving every month. The intimidating figure of Prophet stood in the corner, watching over proceedings in his silvery grey nanosuit.

The team came in on a Saturday to talk with me and they seemed keen to do so, such was their passion for VR. Just looking for someone to talk to about their title and I was more than happy to oblige.

“The Climb” is a hard game to market, a hard game to describe and so – through no fault of the game Itself, is a hard game to sell. There has been nothing like it, to say it’s a climbing game doesn’t do it justice. The only way I can accurately convey the my feelings is to explain my experience rather simply the game play. This is key, the game is not a game, like all VR titles you exist within the environment, however, not all environments are created equal. As you may expect, Crytek took their experience in well optimised visual fidelity and created something as close to immersion as I have ever felt in my life.

They started me easy, I found myself staring at the vertical column of a volcano’s core, based on picturesque landscapes of Thailand and Vietnam. The climb I could see ahead of me filled me with a sense of dread, “I have to go up there”, I took a breath and turned to take in the view before I started my accent. Dragonflies buzzed past my ears, birds of prey soared majestically through the vista. The detail of the larger environment paled in comparison to the microscopic detail of the rock face with its dusty, moss strewn, bug invested nooks and crannies. I took another deep breath reached up with my hand and grabbed a chalky outcrop above my head. The game mechanics are intuitive, simple to understand and satisfying challenging to master, as you start to get to grips (literally and figuratively) with the game, you are rewarded with exhilarating leaps across escarpments, swings around rocky outcrops and finally reaching checkpoints to enjoy the view before the next stage. For PC gamers, the concept of being rewarded by a view at the top may seem rather alien, but I can assure you, the view is worth more than the cleverly calculated score or achievements linked loot you pick up along the way.

With the next environment I found myself struck momentarily dumb, a feat in its own right. Here is was an Alps inspired mountain range, I ducked, my dropped jaw shut by the surprise of a group of wing-suited daredevils swooping overhead, down the vertical mountain wall and toward a village before curving into the distance. Crazy fools I thought, then reminding myself it wasn’t real, right? I looked around again. The presence was palpable. This climb was technically more challenging, frustrating in parts, then intensely rewarding with each section successfully cleared. It ended with a daring shimmy along a cable and leap onto the side of a swinging cable-car. The bell rings and you breath and take in the view.

The next level was immediately recognisable, the dusty red rock of a Grand Canyon. Breathtaking. This level was used to demonstrate competitive play elements, racing ghost players up the face. The ghosts can be picked from game leader-board and filtered on your Oculus friends. This added a whole new and frantic angle to the game, as I climbed I got ahead of the ghost, got cocky and slipped to a lower level, the ghost got ahead and won by a large margin. The competitive experience was well constructed and ultimately a great deal of fun and will likely be the aspect that will ensure return to the title again and again.

Clearly Crytek see VR as another bleeding edge technology that they want to invest in and be at the forefront of, their team – who, let me remind you again, came in on a Saturday to meet me – have an infectious passion for their work and it was a joy to be around. I can honestly say, VR is here to stay and evidently in very safe hands. I can’t wait to see what Crytek do next.