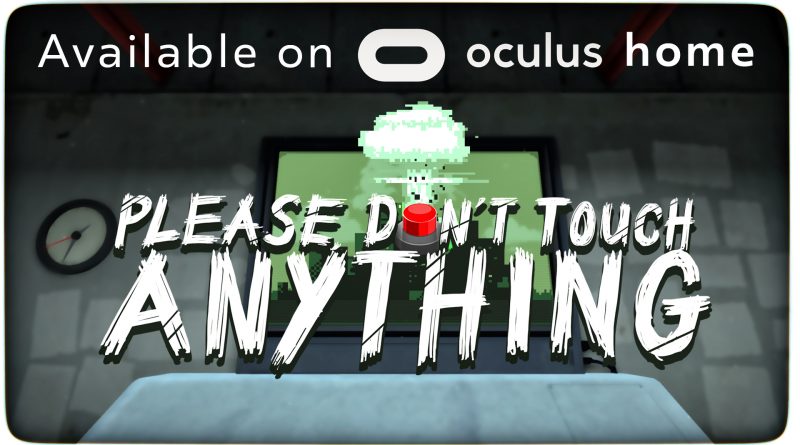 Now that Virtual Reality is becoming more mainstream you begin to see games that were previously meant for traditional 2D  being resigned and ported over to VR systems. Personally I am EXTREMELY excited to see developers taking popular 2D games and bring them back to life in a fully 3D VR environment. Indie game ‘Please, Don’t Touch Anything’ (PDTA) originally released on March 26th, 2015 and was a HUGE hit for those who tried it out, leaving it with over 1000 positive reviews on Steam. This hidden gem will SOON be available on Oculus  Home (MAY 19th) for the Oculus Rift ($14.99) and Gear VR! ($8.99).

The game has been developed by Escalation Studios and Four Quarters based in Texas in partnership with Oculus. Published by Bulkypix based in France.

***The remainder of the article may contain mild spoilers included in text, pictures, & video. When I first started the game I was immediately struggling to figure out my purpose as I had never previously played this game and I was not familiar with any of the objectives. I find it extremely satisfying when you have to slowly figure out things for yourself as opposed to being given too many hints and obvious paths to follow at the beginning of the game. Even so it wasn’t long before I was getting into the groove and creating plenty of chaos!

The developers of this game have done an amazing job at creating a seamless atmosphere that looks and feels like a legitimate work space all the while concealing the fact that almost each and every object is a potential clue that must be looked at, studied, and deciphered for it’s proper meaning within the puzzle. What I really love is the  fact that you don’t WIN the game as much as you PLAY the game. It’s about doing things differently and making sure you troubleshoot properly. You could say this is a creative troubleshooting simulator set in a warped reality! Don’t worry I didn’t forget about the video! Just in case the article wasn’t enough, I have a semi-playthrough ‘Let’s Play’ video available for you to watch! I worked hard on it so please take a look! I played the game for just about an hour an managed to get through about 6 of  the 30+ endings! VRGAMERDUDE PLAYS IN HIS GEAR VR!

UKRIFTER PLAYS WITH HIS CV1!

5 thoughts on “‘Please, Don’t Touch Anything’ Revamped For Oculus Home!”