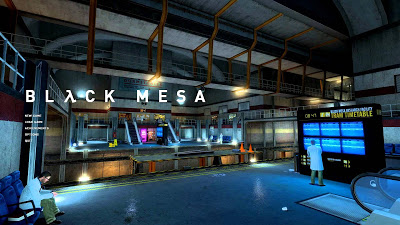 Half Life 2 was my first taste of seeing through the eyes of Gordon Freeman, this was in the early days of the Xbox 360 on an old CRT screen. When the Orange Box dropped way back in 2007, I was absolutely blown away with getting 5 games for the price of one all on one disc!! I was more than happy to pay the retail price of 45 GBP (65.23 US Dollars)
I played the shit out of those games with my bro and my good friend Jake. We used to play “level or a life”,this was a great way to play as we were all more than happy to watch eagerly awaiting our turn. We ran through all the half life content on that disc solid,  we were left with a void longing for more.
I sought out the original Half Life in the hopes that this would quell our urges for HL3. We loaded up the game eyes glued to the screen but to our huge disappointment the game looked like shit. Our young minds could not appreciate it because Half Life 2 was so far ahead of its time, it was ground breaking. As I grew I started to stray from linear titles and moved onto open worlds.  Virtual Reality has re-lit that fire and Linear titles interest me again as long as I can play in VR.
With the power of Vorpx and Vireio Perception Injection Drivers I have been hunting for First Person titles that would potentially work in in Virtual Reality with full 3D, positional tracking and controller support.
I came across a title called Black Mesa, and sure enough it ticked all the boxes. It is a faithful re-imagination of the original Half Life!!! Instantly my finger was lead to the purchase button in steam. Black Mesa started life as a mod but grew and grew until it was actually a full fledged title in its own right on Steam and approved by Valve.
Black Mesa runs on the source engine and in dx9. I have had some success in hacking games to run in VR with Vorpx. I renamed the game exe to HL2, switched on my Oculus Rift and sure as shit the game loaded up in Full Stereo 3D with positional tracking.
After spending some time to dial in my settings, altering the field of view to 120 (using the console) I started the game I remembered the long train journey at the start. The re-imagined version is absolutely beautiful in VR and has definitely re-kindled the feelings I had all of those years ago.
I am super excited to play through in full Virtual Reality once my CV1 arrives in early April 2016.Check out my accompanying video:
Brought to you by IG83
of the VR Spies
www.vrspies.com